But for all the wrong reasons according to TipTopJob.com survey

The prestige, pomposity and tradition of the election battle seem as far removed from the standard office job as possible. But if the public had to, who would they least like to work with? Who would they prefer as a boss? A new survey from TipTopJob reveals some incisive results.

The survey of over 3000 jobseekers concluded that a staggering 51% of the British public would least like to work with Gordon Brown when compared to Nick Clegg (15%) and David Cameron (33%). Adding insult to injury a surprising 45% of voters elected Gordon as the most likely to embarrass themselves at the office party.

The survey also revealed that although the majority of people would prefer to work with Nick Clegg, the Liberal Democrat narrowly missed out on the ‘best boss’ gong to David Cameron. David Cameron was the boss of choice with 38% of the votes.

Unfortunately yet again our Prime Minister failed to impress, ranked as the public’s third choice boss with only 26% of the votes.

Corrine Hutchinson, Marketing Director of TipTopJob.com commented “What I found most intriguing about the results was the public’s clear preference to Nick Clegg as a co-worker but not as a superior. Perhaps this would suggest an inability to lead with strong conviction.”

Corinne continued “I know that the majority of our office was in agreement with the results of the office party question. Gordon seems like the kind of guy to enjoy himself should the right situation arise.” 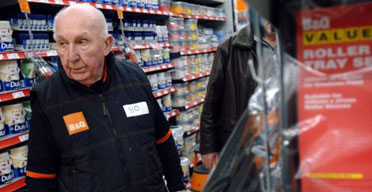